I’ve been waiting for a hot news story to see how quickly Google’s autocomplete suggestions change and now we have one.

Justin Bieber was arrested early on the morning of Thursday, January 23, 2014 in Miami. The earliest dated online news report I could find for the story came from TMZ, which published it’s article at 10:14 am PST.

What’s interesting is that within 6+ hours, Google Autocomplete for “Justin Bieber” was already showing negative suggestions related to the incident, such as:

But what’s more interesting is that within a week, all of the negative suggestions were gone!

Below, we’ll take a look at what happened – in various countries – and see if there’s anything we can learn from the data.

Of course, the story has gone viral and by the time I checked Google autocomplete results for Justin Bieber, “mugshot” was already one of the top 4 suggestions. So, it took less than 6.5 hours for enough content and search activity to cause Google’s autocomplete algorithm to update in the US.

In Miami, 1 week later, the negative suggestions are gone. But what’s interesting is that 30 minutes ago, I still saw “mugshot” as a suggestion in Portland, OR, New York, NY, and Houston, TX. I did not capture a screenshot. Now, as I check all those cities, the results are exactly the same as Miami, shown below.

Why Did “Mugshot” Become A Suggestion?

The image below is a screenshot of Google Keyword Planner data for all keywords that appear in the suggestions above – for both January 23rd and January 30th. The numbers at far right under “Avg. monthly searches” are a 12-month average of the monthly search volume for each term. 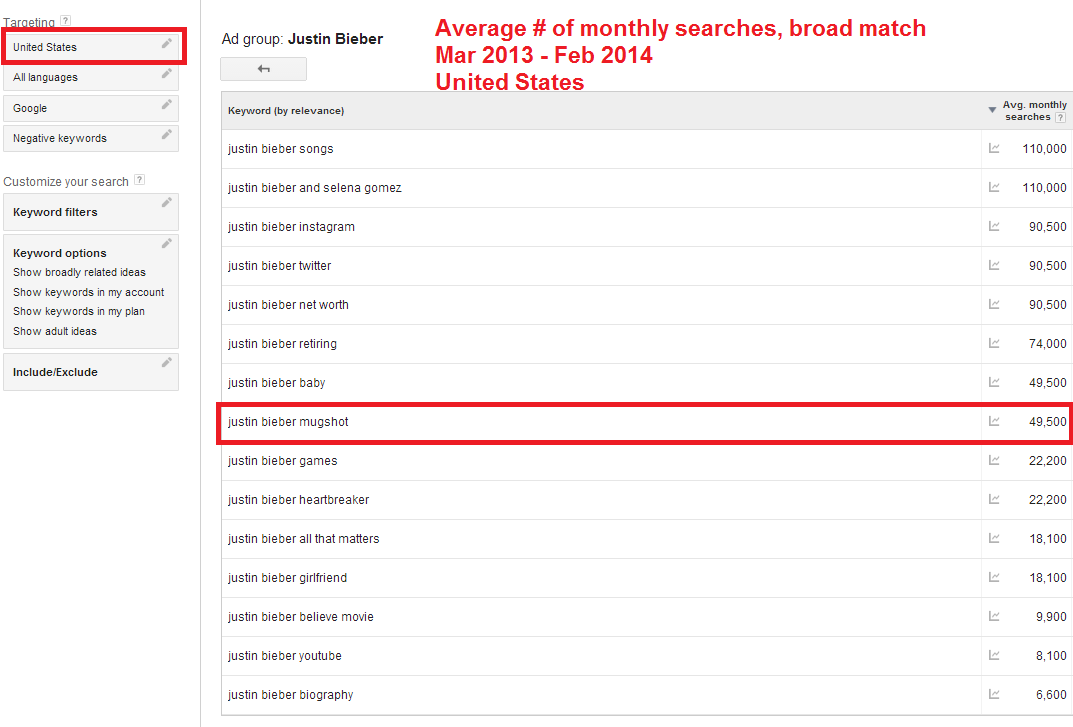 If we didn’t know better, we might think “justin bieber mugshot” is the 8th most popular search term over the last year. By looking at the data above, we might assume Google would ALWAYS show “mugshot” as one of Justin Bieber’s suggestions.

But we know this isn’t the case, since the suggestion was gone within a week and 2 months later, the “mugshot” suggestion is STILL gone. Let’s take a closer look at the data:.

The massive drop in February probably explains why we no longer see “mugshot” as a suggestion in the United States.

“Justin Bieber Twitter” appeared as a suggestion both on January 23, January 30, and as of March 24, it is still a top suggestion. Although search volume for “twitter” spiked a bit in January, you can see that it’s seach activity is far less prone to the traffic fluctuations we saw with “mugshot.”

With a 12-month average of 90,500 searches per month, it’s the 4th most searched term on our list and it’s consistency is likely why we see it appearing so frequently.

Like “twitter,” “Justin Bieber Instagram” also appears as a suggestion on January 23, January 30, and March 24.  That’s because it’s almost a carbon copy of “twitter,” with 90,500 per month over the last year and very little fluctuation from one month to the next.

Why Isn’t “Mugshot” A Google Suggestion Any Longer?

It makes sense that the term would’ve appeared as a suggestion while the story was hot and as soon as the story died down, so did the search activity. When that happened, the suggestion disappeared, too.

I’d surmise the following from this data.

A dramatic surge in search activity can cause a term to appear as a suggestion in Google, but unless that search activity is maintained, the suggestion will disappear. Of course, this assumes that there are enough other search terms with adequate annual search volume to overcome the spike for the negative term.

I’d theorize that a client with a sudden surge of activity for a negative term might see similar results: If they have plenty of other positive terms with high levels of monthly search activity, the negative term may disappear quickly after the story dies. Unfortunately, many of the clients we work with have very low search volume, so a negative spike can be much longer lasting.

If you’re interested in going further, I’ve broken out Justin Bieber’s suggestions in different countries when the story broke in January 2014. Below is that information.

It’s interesting to see the suggestions for the UK are different. I’m guessing that because many Englander’s were awake when news of the story first rolled in, they began feverishly searching the internet looking for details. 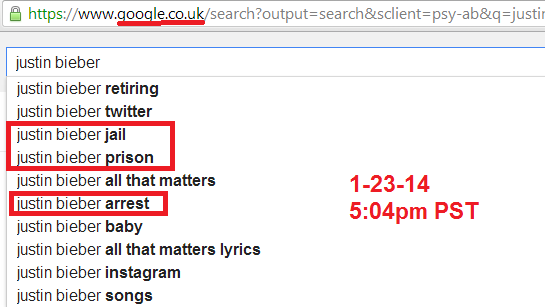 Here’s how it looks in the UK 1 week later. Notice that ALL THREE negative terms are now gone.

In Australia, citizens were either going to bed when the story broke, or they just don’t care about Justin Bieber. Either way, there hasn’t been enough search activity “Down Under” to update the suggestions.

And here’s how it looks 1 week later in Australia. No changes.

Lastly, I checked google.co.jp to see what how the news affected Google autocomplete in Japan. Here, we see results more inline with the United States. 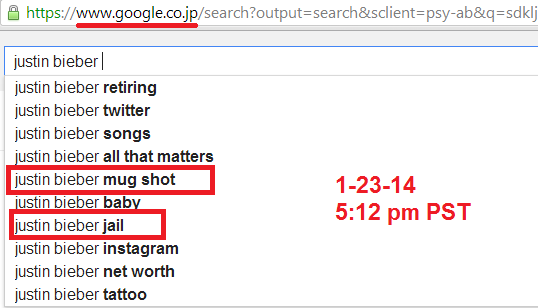 One week later, “mug shot” and “jail” have disappeared in Japan, too.

What Can We Learn From This?

1) Clearly, Google Autocomplete can update very quickly, if there’s enough content and high search activity. We won’t know how much search activity for the negative terms until Google Keyword Planner data is updated. This usually occurs in a couple of months.

Three of the four countries I checked showed at least one of the negative terms related to the story within 6.5 hours of it being reported. That’s fast!

We also see how quickly negative terms can fall out of Google Autocomplete, as just one week later, all 4 countries we checked had no negative suggestions. Keep in mind, of course, we are dealing with an international superstar; we don’t see this much volatility with our clients.

2) Usually when we do work for a client, we ramp up search volume for positive terms starting at a modest level. Most low volume cases take about 4 months to see changes. This conservative approach has worked well.

The fact that autocomplete can change so quickly, might suggest that we can get faster results for clients if we speed up the search activity. Further testing is needed on this before we roll it out, as we need to consider how much content is available (definitely a factor) and we don’t want to set off a Google filter that would cause the suggestion never to appear.

More data to come as time passes and the story ages.